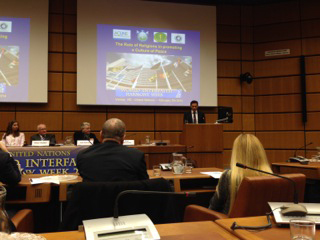 Good Afternoon. I am pleased to have the privilege to address you at this conference, which is in my opinion a very important step for universal peace.

In article 18 of the Universal Declaration of Human Rights, it states:

“Everyone has the right to freedom of thought, conscience and religion; this right includes freedom to change his religion or belief, and freedom, either alone or in community with others and in public or private, to manifest his religion or belief in teaching, practice, worship and observance.”

With such a goal we cannot get complacent – we must work daily for tomorrow there is more work waiting to be done. This is really an exciting time for humanity.

Religion is subtle indicator for the political worldview. Ethics of most nations is built on religious benchmarks. The social structure of many states is linked with the religious belief of the majority of the population.

If we all followed one biblical law, it would be, “Love your neighbor as yourself” as told in Leviticus 19:18. This statement implies the dignified social intercourse with all people; and also respects the religious beliefs of others.

Today many representatives of different organizations have come together; and we all are witnesses that it is possible to share peacefully the same little place, the same room – although we probably all have different opinions and insights in religion, culture and traditions.

Tolerance is a nice word but it seems not to be enough to establish peace and harmony in the world. Some people believe in the power of love, others in the power of unity or enlightenment.

There are people who believe in God, as the creator, sustainer, preserver or as the judge – others do not believe in any of these terms.

Freedom is an essential cornerstone for peace. But we all know how difficult it is to establish inner and outer freedom. This is why religion is so fundamentally important for peace, because freedom is a main goal of most religious movements.

We all know and learned too well from history that religion can be used as a powerful political tool for peace AND war. There is no more powerful tool than religion for social reform.

When religion is used for war, it blindfolds it citizens and activates instinctive patterns of destruction, which people cannot control consciously. It is not possible to discuss all of the horrible things in human history which were connected with religious movements.

Also, it is not possible to list all blessings and positive changes which are based on religions.

It does not depend on the religious movement but on the people using this tool. From this perspective, it is easy to understand that a religion can be used by wise people as a connecting bridge to build the universal brotherhood of humanity.

After the Second World War, the members of the United Nations formulated together the Universal Declaration of Human Rights. These rights are so critically important to the future of humanity, yet if you ask most school children across the world to name one of these laws, they couldn’t!

Parents and teachers of the world should invest their energy into teaching elementary school children these articles to mold the child’s values into love and compassion, instead of hatred and cruelty.

Children are the seeds of our future. The earlier and better they are educated in important ethical aspects, the more equipped they will be in handling the future and challenges of humanity.

If we look around and ask adults, most will not know any of these basic human rights. We should not be satisfied until we reach out and teach the adults as well.

People have outer conflicts in life because of inner conflicts within the self. Most conflicts start as an inner process. With this line of thought, we can conclude that the outer wars are only a reflection of our inner wars. The “Holy War” mentioned in some religions, should be seen as an inner „Holy War“.

That is why we can only win this war WITHIN us. Only if we can purge our own negativity, like selfishness, greed, envy, etc. – will we be able to link the bonds of universal brotherhood.

As you can see, religion can be one of the primary tools to solve many human challenges, because religion, if properly instructed, is an inner process which should lead us to liberty and everlasting peace.

If interpreted improperly, religion can be used as a weapon which can cause more horrible damage than any nuclear bomb. How many people have died throughout history due to religious beliefs, inter-religious conflicts, etc.?

We must learn from history NOW, TODAY, or we will continue to repeat the same painful mistakes.

So, we must make important decisions. We can live as a cell of the wonderful body of humanity which is connected with all other cells of this body; or if we can live isolated and in the darkness of selfishness. It is our decision each day of our lives to move towards or away from this goal.

For the Sun, it does not depend if we believe in Christ, Mohammed, Buddha, Krishna, LaoTse, etc. for its light shines on us without discrimination. Please forgive me, that I am not able to mention all religious teachers of the past or present. I have chosen these wise men because they are the most well-known, and not because they are the most important in the history of humanity.
I hope that it is possible to get the main idea. The Sun does not discriminate who it shines its light on. It sends perpetual warmth and light.

If only we could mimic this Solar principle and dissolve all petty political, spiritual, social, religious, gender, cultural hatred, then we would truly see that we are all on the same ship.

As the declaration of human rights says in article 1:

“All human beings are born free and equal in dignity and rights. They are endowed with reason and conscience and should act towards one another in a spirit of brotherhood.”

How many hours of the day do we live in the spirit of brotherhood?

We have the possibility to get insight in other beliefs, in other religious movements and to realize that these followers are people like you and me – they are part of one collective brotherhood.

It never depends on what clothes someone is wearing, which God they are praying to or which customs they are following.

Even the tiniest electron of your cells is connected with your entire body. Similarly, the individual human being is connected with the whole of humanity. Individuals of any nation, religion, ethnic group, language and culture, each represent one cell in the great body that is humanity.

Together, we constitute the universal brotherhood of mankind. Together, we are all in the same cosmic boat and we all share the same path. The crises of the world are the crises in our consciousness. Therefore, there is only one successful path:

by changing ourselves we will change the entire world.

Years passed by and the servitude became greater.

Years passed by and the disease spread further.

Years passed by and the poverty grew wider.

Years passed by and the hatred expanded deeper.

Years passed by and the foolishness swelled larger.

Years passed by and we forgot that we each follow a collective vision.

We can only be satisfied when our brothers and sisters have chosen to extend a helping hand and support each other instead of killing one another with weapons.

We can only be satisfied when our brothers and sisters work in professions that are their life’s true calling instead of merely existing day-to-day as paid debt slaves.

We can only be satisfied when our brothers and sisters are truly healed instead of having only numbed their external symptoms.

We can only be satisfied when our brothers and sisters are learning the eternal wisdom of life instead of going to schools that blind them with half-truths and incomplete knowledge.

We can only be satisfied when our brothers and sisters cultivate a decent sustainable environment to live in instead of desecrating and depleting our natural reserves.

We can only be satisfied when our brothers and sisters share in the abundance of prosperity and wealth instead of starving from greed and deprivation.

We can only be satisfied when our brothers and sisters recognize the laws of life instead of being confined to living in a prison.

We can only be satisfied when our brothers and sisters praise God genuinely and of their own accord instead of simply submitting to the hounding of religious zealots.

We can only be satisfied when our brothers and sisters accept social responsibility for themselves and their fellow man instead of maliciously exploiting others.

We can only be satisfied when our brothers and sisters empathize with the needs of all humanity instead of feeding only their own egoistic ambitions.

We can only be satisfied when our brothers and sisters live in harmony with the great family of humanity instead of living alone in isolation.

Enough time has passed. Now, it is up to us to fulfill this vision of the new world together.

May God bless you and thank you for your attention. 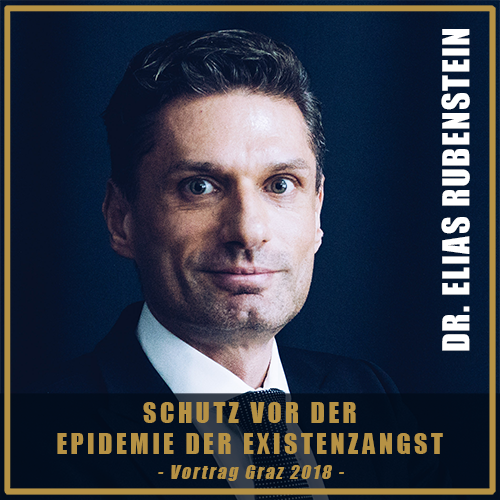